An insulated-gate bipolar transistor (IGBT) is primarily used as an electronic switch, which combines an input MOS and an output bipolar transistor. So what will the internal structure of the IGBT module look like?

1 IGBT Module Explained
The model of the IGBT module to be disassembled as an example is: FF1400R17IP4. The appearance and equivalent circuit of the module are shown in Figure 1. The length, width and height of this module are: 25cmx8.9cmx3.8cm. The module contains two IGBTs, which are what we often call half-bridge modules. The rated voltage and current of each IGBT are 1.7kV and 1.4kA.

8, 9, 10, 11, and 12 are power terminals and need to be connected to a power circuit.
1, 2, 3, 4, and 5 are auxiliary control terminals, which need to be connected to the gate drive circuit.
6 and 7 are NTC thermistors, used for temperature detection or over-temperature protection.
After having a general understanding of its structure, what can we do with such a black module with this structure? Take an example around us: new electric vehicles, everyone should be familiar with it. Three such black modules can be used as a three-phase motor driver. If it is equipped with a battery, it can drive an electric bus. Of course, this module is also used in many other applications.

2 IGBT Internal Structure
After having a preliminary understanding of the external structure and application of the IGBT module, let us enter the subject of this article to see what the inside of this high-tech black module looks like. Figure 3 is the internal picture of the IGBT module with the black casing removed. It should be noted that the most common copper and aluminum are inside the IGBT module.

Figure 4 is a cross-sectional view of the IGBT module. If the black casing and external connection terminals are removed, the IGBT module mainly contains 3 components, the heat dissipation substrate, the DBC substrate and the silicon chip (including the IGBT chip and the Diode chip), and the rest is mainly solder layers and interconnecting wires are used to connect IGBT chips, Diode chips, power terminals, control terminals and DBC(Direct Bond Copper). Below we will briefly introduce each part.

① Heat Sink Substrate
The bottom of the IGBT module is the heat dissipation substrate, the main purpose is to quickly transfer the heat generated by the IGBT switching process. Since copper has better thermal conductivity, the substrate is usually made of copper, and the thickness of it is 3-8mm. Of course, there are also substrates made of other materials, such as aluminum silicon carbide (AlSiC), both of which have their own advantages and disadvantages.
② DBC
DBC (Direct Bond Copper) is a ceramic surface metallization technology, which contains 3 layers. Have a ceramic insulating layer in the middle and a copper clad layer above and below respectively, as shown in Figure 5(a). Simply put, it is to cover both sides of an insulating material with a copper layer, and then etch a pattern that can carry current on the front side, and the back side must be directly soldered to the heat sink substrate.

Figure 5. BDC Base vs PCB

The main function of DBC needs to ensure the electrical insulation capacity between the silicon chip and the heat dissipation substrate and good thermal conductivity, while also providing a certain current transmission capacity. The DBC substrate is similar to a 2-layer PCB circuit board. The insulating material in the middle of the PCB is generally FR4, while the commonly used ceramic insulating materials for DBC are aluminum oxide (Al2O3) and aluminum nitride (AlN).
For the IGBT module analyzed in this article, there are 6 DBCs inside, and each has 4 IGBT chips and 2 Diode chips. Among them, 2 IGBT chips and 1 Diode chip are used as the upper tube, and the rest are used as the lower tube. As shown in Figure 6.

③ IGBT Chip
The IGBT chip model used inside the module is: IGCT136T170. The manual can be downloaded from Infineon official website. Figure 7 shows the top view and basic parameters of the IGBT chip. The gate and emitter of the IGBT are above the chip (front side), and the collector is below (back side). The thickness of the chip is 200um. After the IGBT powers on, the current flows from bottom to top, so the IGBT of this structure can also be called a vertical device. 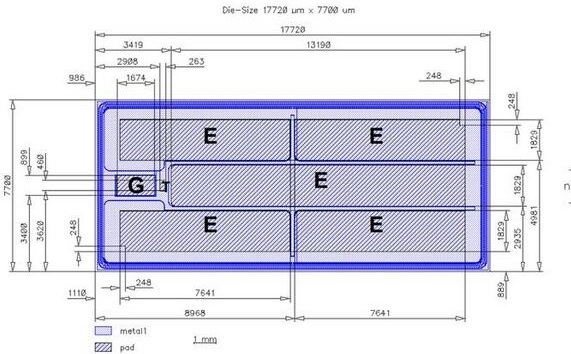 If you make a vertical cut on the 200um chip, you can get the internal structure shown in Figure 8, which is a combination of P-type or N-type semiconductors with different doping. Figure 8 shows the well-known equivalent circuit of an IGBT, which is usually understood as a MOS-controlled PNP transistor. When start to learn about power electronics, you may feel that this picture is a bit strange. Why not draw the collector on the top and the emitter on the bottom? Until you understand that the IGBT current flows from bottom to top, it is not difficult to explain. 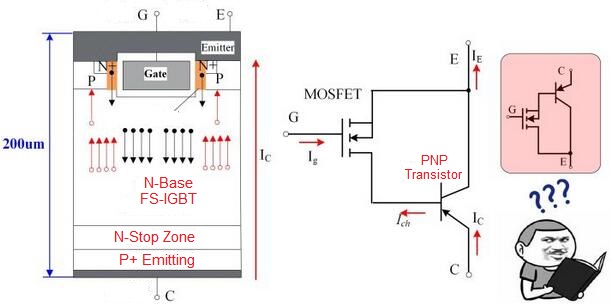 Let’s have a general understanding of the electrical parameters of this IGBT chip. This chip can pass a DC current of 117.5A at 100°C. It can be seen from Figure 4 that a single IGBT device inside the module contains a total of 12 IGBT chips, so the total current is: 117.5*12=1412A, which is basically the same as the 1400A rated current in the IGBT module manual.
In order to ensure the current sharing effect between IGBT chips, a 11.5Ω resistor has been integrated inside the gate of each chip. At the same time, considering the current sharing between the DBCs, the two chips on each DBC share a gate resistor externally, as shown in Figure 10. When measuring it with a multimeter, and the resistance is about 4.13Ω. You can calculate it in conjunction with Figure 9 to see if it is consistent with the 1.6Ω in the IGBT module manual. Of course, you can refer to the official manual for more detailed parameters of the IGBT chip.

④ Diode Chip
Figure 10 is a top view of the Diode chip, with the anode on the front and the cathode on the back. The current direction of the diode is from top to bottom, which is exactly the opposite of the current direction of the IGBT. The rated current of the diode chip is 235A, and each IGBT is composed of 6 diodes in parallel, and the total current can reach 1410A, which is basically the same as the 1400A in the module manual. The thickness of diode chip is the same as IGBT, it is also 200um. For more detailed parameters of the diode chip, please refer to the official manual.

Such a thin semiconductor material can have kV voltage and hundreds of amperes of current on and off, it’s amazing. This is why the price of high-power semiconductor devices is so very expensive.
The upper copper layer interconnection of IGBT chip, Diode chip and DBC is generally realized by bonding wires. Commonly used bonding wires are aluminum wire and copper wire. Among them, the aluminum wire bonding process is mature and the cost is low, but the electrical and thermodynamic properties of the aluminum wire bonding are poor, and the expansion coefficient mismatch is large, which affects the service life of the IGBT. The copper wire bonding process has the advantages of excellent electrical and thermodynamic properties, high reliability, and is suitable for modules with high power density and efficient heat dissipation. 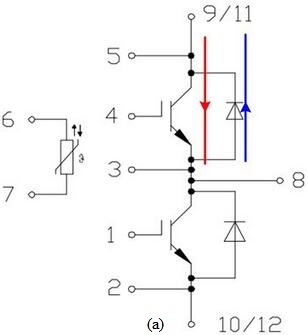 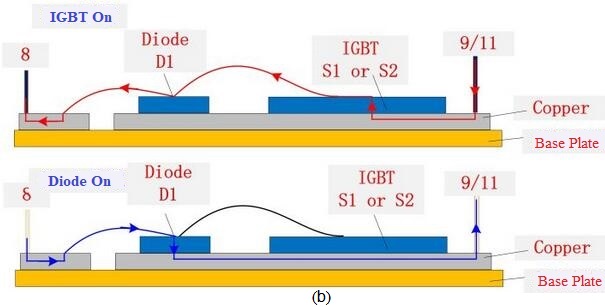 4 How to Disassemble IGBT Module?
Some friends may be curious about how to disassemble this module, but it is actually very simple. You only need to prepare two screwdrivers and a small hammer. 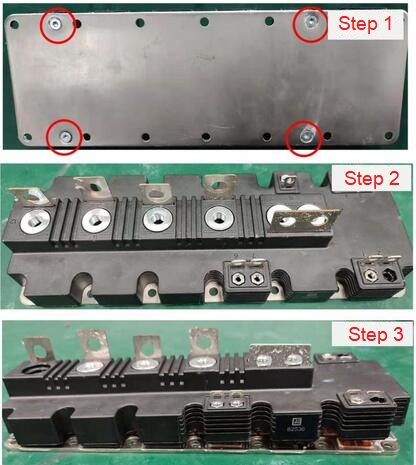 Step 1: Unscrew the 4 screws at the bottom of the IGBT module.
Step 2: Use a flat-blade screwdriver to pry open all the terminals on the front of the IGBT module. This step is very important. It is necessary to ensure that all the terminals after being pried are vertical to the module substrate.
Step 3: You need to fix the IGBT in one place, or use a flat-blade screwdriver to align any position of the connection between the plastic casing of the IGBT module and the substrate, hit the screwdriver with a hammer, and pry the casing from the substrate with the screwdriver. After prying open one position, place something on it, and then pry another position, repeat that, after slowly prying open, just pry open with your hands directly. Get incredible range of styles, designs for Hot dog Boxes at GoToBoxes