1 Inverting Amplifier Basics Overview
1.1 Working Principle
As shown in the figure, the inverting amplifier circuit has the function of amplifying the input signal as inverting output. "Inverting" means that the positive and negative signs are reversed. This amplifier uses negative feedback technology, which used to return a part of the output signal to the input. In Figure, the wiring method of connecting the output Vout to the inverting input terminal (-) via R2 is negative feedback. 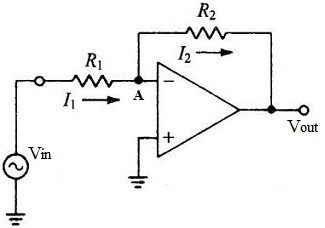 1.2 Inverting Amplifier Gain Calculator
Calculate the gain through the relationship between the input and output in this amplifier circuit. The gain of an inverting op amp is the ratio of the feedback resistance to the input resistance, that is, the ratio of Vout to Vin, and the formula is Vout/Vin= (-I1xR2) /(I1xR1)=-R2/R1. The resulting gain is negative, indicating that the waveform is inverting.
The current flowing through R1: I1=(Vi-V-)/R1...a
The current flowing through R2: I2=(V--Vout)/R2……b
V-=V+=0………………c
I1=I2……………………d
Solve the above algebraic equations to get Vout=(-R2/R1)*Vi.
This is the input and output relationship of the inverting amplifier circuit.

1.3 Inverting Amplifier Features
It can reduce the input impedance or keep a certain value.
It can be used as a current input type.
Virtual short-circuit point is generated at a certain potential.
Its positive input port is free.
If the signal source impedance is low, it is easier to obtain a required S/N.
The magnification is -Rf/R.
1.4 Inverting Amplifier Functions
The inverting amplifier is the basic gain stage in the CMOS circuit. It adopts a common source structure, and the load can be an active load or a current source.
Advantages: The potential of the two input terminals is always approximately zero (the non-inverting terminal is grounded, and the inverting terminal is virtual ground). With only differential mode signals,it has strong anti-interference ability.
Disadvantages: The input impedance is very small, equal to the resistance of the series resistance from the signal to the input. 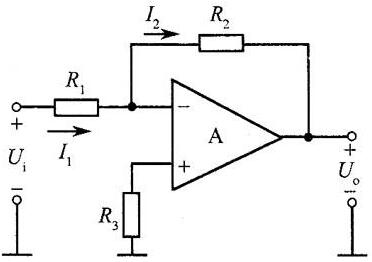 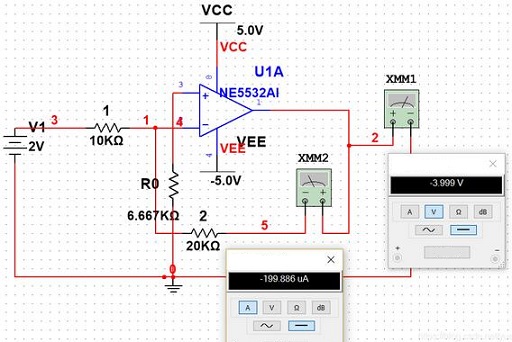 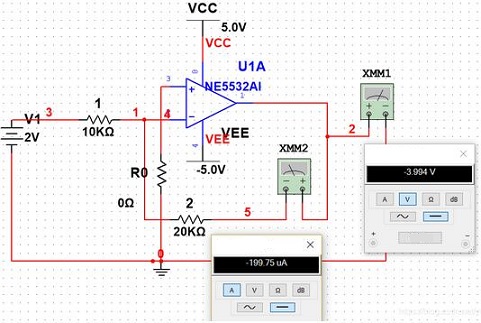 From above, it doesn't matter without R0, take a look at this below. 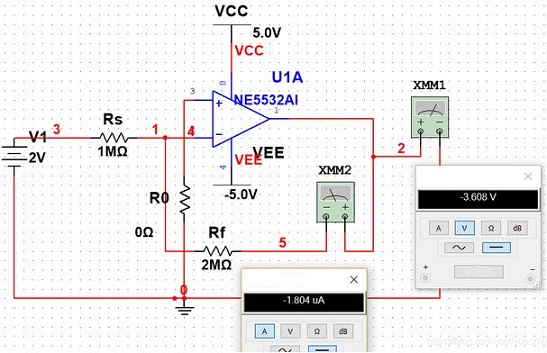 Their output is different, if the expected result is -4V. The reading value -3.608V obviously does not meet the design requirements. We now know that the resistance value of Rs in Figure is orders of magnitude greater than the input resistance of the integrated operational amplifier. Next, if have R0, look at the picture below.

It can be seen from Figure 4 that after adding R0, the output of the op amp is normal. Why is this?
In a TTL circuit, the transistor has a bias current, which will produce a DC voltage drop on the feedback resistor of the e pole. Although it is small, the amplifier has a high amplification factor, which affects the output accuracy greatly. A resistor in the same value as the negative terminal is connected to the positive terminal to cancel the effect of the bias current.
R0 is a compensation resistor, which minimizes the bias current error to ensure the symmetry of the differential amplifier circuit of the input stage. When its value is u=0 (that is, the input terminal is grounded), the inverting input terminal is always the equivalent resistance, that is, the parallel connection of the resistance of each branch, so R0=Rs/Rf, through Rf in the circuit, induce negative feedback. According to practical experience, it is best to add a compensation resistor to improve the stability of the circuit. Of course, it can be omitted under normal circumstances. 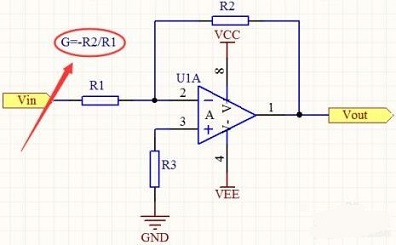 Step 2: Determine the supply voltage.
Ensure that the output voltage after the input voltage Vin is multiplied by the amplification factor (-R2/R1) will not exceed the power supply voltage. If it is not the rail-to-rail operational amplifier used, it is better to have a margin of 1~2V. 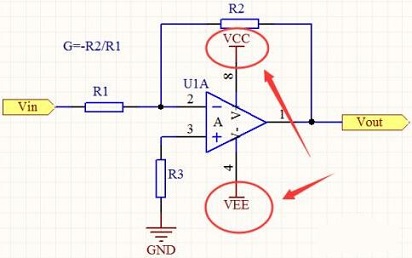 Step 4: Check the bandwidth with the slew rate (SR).
If the amplifying is a large AC signal, there may be insufficient bandwidth, and it may not be accurate enough to calculate based on the gain-bandwidth product.
SR = 2*pi*f*Vp - f = SR/(2*pi*Vp), where Vp: peak output voltage.
If the calculated value f is less than the input voltage frequency, the operational amplifier is not suitable and needs to be replaced. The actual bandwidth should be the smaller of the gain bandwidth product and the slew rate.

Step 6: Determine the resistance value.
In step 1, the ratio of R1 and R2 has been determined. R1 is generally 1k~10k. A small value is prone to cause gain errors, and a larger value will increase noise (resistor thermal noise). R2 takes the resistance value corresponding to the multiple of R1.
It is better to choose the chip resistor, because the parasitic parameters are small.
R3=R1/R2, if R1 and R2 are connected in parallel, which are not required.